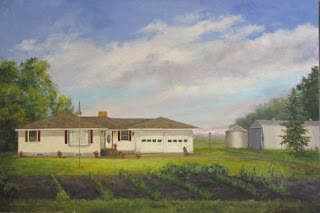 Miller Farmstead  oil 24x36
This was a commission piece done for a local farm family. Commissions are always an adventure. There are always  specific things that need to be included.  The choices are up to the person/s requesting the piece to be painted but there are always fun families  to work with and this was one of them. I was given much artistic licence. Not  only was their home and out buildings to be included but the garden in front and last of all way on the right side of the garage is their dog . Taking his picture to include him in the painting was  hilarious. I went to their farm and since the dog is very friendly he came over and immediately began investigating me as I was walking around with my camera. Since he was what I came to photograph I gave the command to SIT, he looked at me like I was nuts, so the second command was given louder and firmer, still no compliance, the third time I broke the sound barrier and he plopped his butt firmly to the ground and just looked at me. After taking all the reference photos I needed I simply got in my car with him still staring at me as drove off.  When I spoke  to his owners the next week I found out he always got a treat when he would sit, so now of course I was feeling very guilty and the next week brought him the biggest bone I could find in the pet store. No wonder he looked at me as though I was cheating him of something.
Posted by Jean Ranstrom at 2:50 PM

Jean Ranstrom
I was born, raised and have lived most of my life in the Red River Valley of ND,MN. with a five year stay in AZ.I have painted since I was ten years old and have taught oil painting and pastel workshops for many years. I have 5 children and 4 stepchildren, all grown. I teach painting to anyone who wants to learn,We raise a very large garden and share produce with neighbors and foodshelves. I am an ambitious canner and preserver of many types. I cannot imagine my life without painting and sharing the gift with others.